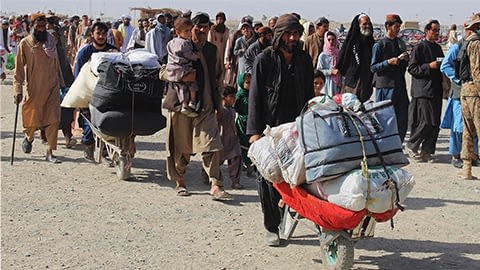 With the re-establishment of the Taliban Islamic Emirate in Afghanistan, efforts to flee the country have now intensified. An average of 2,000 to 5,000 Afghan citizens concerned about the current situation are reportedly trying to enter Iran illegally every day.

These citizens decided unemployment in Afghanistan increased, and the Taliban group is trying to prolong the life of their regime by putting pressure on citizens. In recent weeks, the arrest and even killing of people affiliated with the former government have been a significant case that the Taliban have been accused of.

Afghan citizens, most of whom do not have passports, are reportedly trying to save their lives by taking the risk of smuggling. The group is trying to smuggle into Iran. Others, who have tickets and are not threatened, try to enter Pakistan by land.

This daily trend continues while the situation in Afghanistan has seriously deteriorated. Still, Afghan citizens think they need to accept the risk of death to save their lives and go to other countries to get rid of the current situation. Bring the neighbor.

Currently, several social activists warn that the continuation of this situation is irreparable for Afghanistan because of the Taliban’s actions against Afghan citizens and the country’s continuing economic and political crisis; thousands of trained forces are inevitable to Afghanistan leaves.

At present, Afghan citizens, especially those of the literate generation, have understood that Afghanistan’s political and social situation is not changing. While the Taliban have a chance to gain recognition by forming an inclusive government, the Taliban are now insisting that the group is not ready to share power.

Afghan citizens, meanwhile, experience more psychological and social harm than any other group. Experts believe that continuing this situation will worsen the situation and pave the way for the spread of brain drain from Afghanistan. In recent weeks, the Taliban have been accused of taking advantage of the situation by arresting and imprisoning influential figures.

But this action of the Islamic Emirate has faced national and global reactions. Although the Taliban insists that there is no threat to Afghan citizens and that any group can live freely in Afghanistan, these allegations are contrary to the Taliban’s previous commitments. Their actions appear to have delayed the recognition process of the Islamic Emirates of the Taliban. The world has postponed them as the group pushes the people hard to control and fulfill their desires.