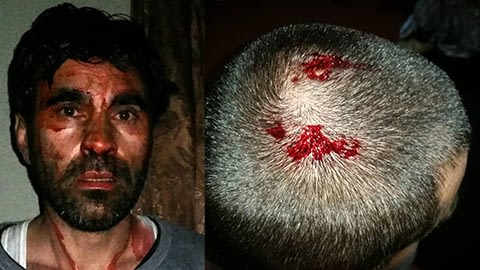 As the IEA imposes restrictions on journalists, there are now reports that Afghan media activists are being targeted more than ever by unknown individuals using the name of the Taliban; in the most recent case, the head of Khavar Radio and Television claimed that the night before (1/15/2022), some unknown individuals who had introduced themselves as security personnel of the Islamic Emirate were attacked by them. The severely beaten person insists that these people come to his house at 11:30 pm using the name of the Islamic Emirate and then try to kill him.

This person is called Ahmad Zaki Qais, and he is in charge of Khavar Radio and Television. Mr. Qais narrates the story as follows: “On January 15, 2022, at eleven o’clock in the evening, they came to my house and asked me to provide them with the address of the community elder. These people were employees of the 16th security district of the city. When I opened the gate, they attacked me and hit me on the head with tools; one of them tried to cut my throat with a knife, but I managed to close the gate again, and I was able to save myself again. “I returned home.”

Pictures have been released of Zaki Qais, who has suffered several blows to the head and his health condition is highly worrying. Mr. Qais issued an audio message urging all reporters to publicize this information. He stressed that these people introduced themselves as employees of the 16th security district of Kabul, and that is why he tried to help them. He emphasizes that the people involved in this case should be identified and punished as soon as possible. At the same time, Mr. Qais called on the Taliban’s judiciary to take the issue seriously and not allow unruly individuals to seize the opportunity to worsen the security situation in Kabul.

The Islamic Emirate of Taliban has not yet commented on the matter. In contrast, journalists’ rights groups in Kabul have called the move barbaric and called for an immediate investigation into the case of Zaki Qais, head of Radio and Television of the East.