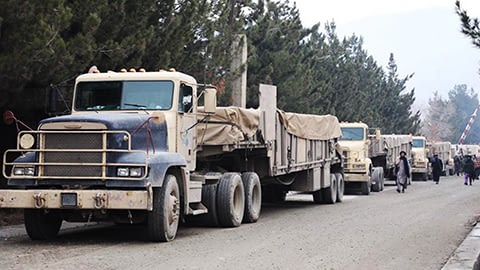 While Afghanistan is in dire need of humanitarian assistance, some regional countries, including India, are now trying to help the country’s citizens in this challenging situation by transporting thousands of tons of wheat to Afghanistan. The Taliban have reportedly received humanitarian aid from several countries, mainly in wheat shipments to Afghanistan. The Taliban-led government is now talking about sending donated wheat to 13 provinces. The Taliban prime minister reportedly decides, and the Ministry of National Defense has begun transferring donated wheat to 13 provinces.

The National Movement and Transportation Brigade of the Taliban Ministry of Defense are responsible for this. Maulvi Bismillah, commander of the Taliban’s National Mobility and Transport Brigade, told the media on Monday: ” According to him, the security department and personnel of this brigade have so far transferred the donated wheat to two provinces of the country. It is said that the transfer process to other provinces will be completed soon.

According to international reports, the Taliban is announcing the start of the process. Afghanistan is in the worst human rights situation, and poverty has risen to an all-time high. According to reports, the Taliban is currently trying to help the country’s citizens by distributing this amount of wheat to alleviate the challenges of the country’s citizens. The Taliban are reportedly trying to pay wheat to government employees in exchange for salaries, a decision that several government officials have heavily criticized. Still, some government officials say that the situation in Afghanistan faces many economic challenges; this action of the Taliban can help the needy more than ever to get them out of poverty. Meanwhile, the Islamic Emirate has said that this wheat will be distributed more to people in serious need.