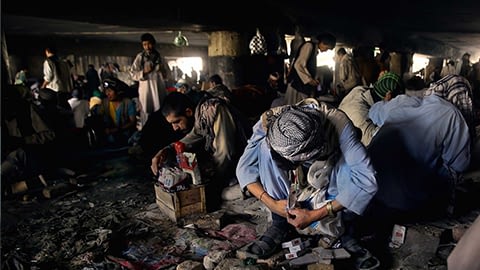 According to official statistics, drug addiction in Afghanistan is a serious social problem that at least three and a half million Afghans are accustomed to. Still, In the latest issue, Abdul Salam Hanafi, the Taliban’s second deputy prime minister, said the number of addicts in Afghanistan was higher than previously reported.

said that the responsibility for treating addicts now lies with the Islamic Emirate and that there will undoubtedly be problems ahead. He called on the people to work for the development of their country to manage the current crisis in the economic, social, and health sectors.

“We saw that nothing was done for the development of the country during the occupation, except for our youth who have become addicted and social problems have increased,” Hanafi added. Meanwhile, the acting Minister of Information and Culture says that since some countries have been defeated in the military war in Afghanistan, they have started negative propaganda and imposed sanctions against Afghanistan. “Global experience has shown that those countries that have faced sanctions, those countries have been settled, we will certainly overcome these problems,” said Mullah Khairullah Khairkhah, head of the Ministry of Intelligence.

Officials of the Islamic Emirate say that they welcome the humanitarian aid of any country to the people of Afghanistan, but in no way they will accept their conditional assistance.