Taliban attempt to curb social media propaganda against the Taliban 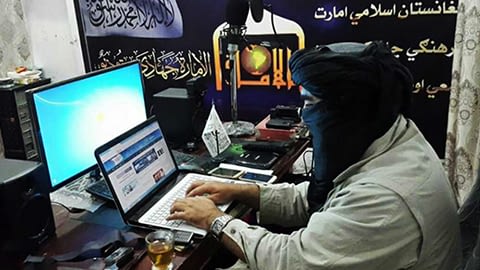 As the distance between the Islamic Emirate and the people widens reports now suggest that the Taliban have taken a new advertising approach on social media. In the latest case, several Taliban propaganda officials have called on their supporters to take action against negative propaganda and prevent people from propagating against the Islamic Emirate by creating fake accounts. In a tape made available to the media, Taliban propaganda officials urge their supporters to stand up against negative propaganda against the Taliban by creating fake user accounts and girl accounts.

While the Taliban believe that they have risen from the people, this is not a false claim that the Islamic Emirate is fond of. In the latest case, several activists on the social networks of the Islamic Emirate have called on all their supporters to stand up against anti-regime propaganda. According to the Taliban propaganda apparatus, all propaganda is directed from refugee camps outside Afghanistan. Such anti-regime propaganda is mainly carried out by figures affiliated with the former Afghan regime. Taliban propaganda activists have now ordered all their supporters to stand up to the propaganda by creating fake accounts.

In an audio message released by a Taliban propaganda official, the Taliban insisted that most social media accounts be for girls. “You all have to have two Facebook accounts, one with the original and the other with the fake name. Try to make your Facebook page with the name of the girls; it is better if the image is with the Islamic hijab,” said the Taliban propaganda official. “It’s better, and if it does not have a photo, it is not a problem. But Facebook should be created under the names of a girl.”

The Taliban propaganda official added: “We share everything that happens across Afghanistan in WhatsApp groups. Most of our focus is on anti-Emirate propaganda. In some cases, we publish responses to these messages.” And in some other cases, we target and propagandize some people; we share these things on Facebook, we do it to strengthen the system to prevent those sitting in immigration camps. “They are propagandizing, they should be answered, and more should be done on Facebook.”

According to opinion polls conducted by reputable foreign institutions, the report comes as the distance between the people and the Taliban Islamic Emirate has widened. In addition, it is believed that if the Taliban Islamic Emirate does not take action to address the challenges facing the people, the crisis will affect their government more than ever.