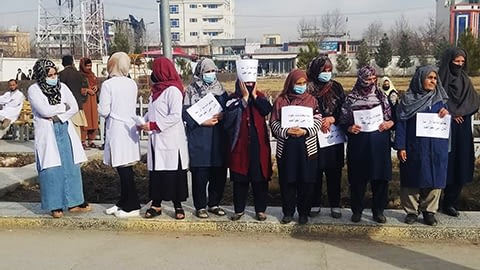 Although the Islamic Emirate of Taliban has claimed that they are trying to pay the salaries of civil servants, especially in the health sector, as soon as possible, some doctors and health workers in the country claim that they have not been able to get their salaries for months. In the latest case, several doctors and staff at a government hospital in Takhar province protested the non-payment of their salaries, chanting “Hungry stomachs can not work” and calling on the head of the Islamic Emirate government to pay their salaries. The protesters insist they have not received their salaries for months.

The doctors say they have not received their salaries for six months now and face financial difficulties. According to these doctors, they have no money to buy food, but the Ministry of Public Health officials have not paid attention. Protesting doctors say that while they have repeatedly approached public health officials to pay their salaries, they only make promises and do not take action. Doctors and staff at Takhar State Hospital warn if their demands are not fulfilled, they will quit their jobs.

Meanwhile, on Sunday, 16th of Jan, teachers in two districts of Takhar also protested against the non-payment of their salaries. Meanwhile, reports from Kandahar province indicate that at least 75 children have died from starvation. Health officials at Mirwais Hospital in Kandahar province say that 75 children have died of starvation since the beginning of the solar year. It is also said that in 1950 starving children were transferred to this hospital during this period. Save the Children Foundation expressed concern about the growing number of malnourished children in Afghanistan.

Officials say that another 700,000 children have been added to the number of malnourished children in Afghanistan in the past year. Save the Children foundation says that the number of malnourished children has increased from 3.2 million to 3.9 million in the past year. The reports come as thousands of doctors are forced to resign for economic reasons. At the same time, medical support organizations warn that if the Taliban’s Islamic Emirate ignores the group’s financial woes, the situation will worsen. Afghanistan’s fragile health will be challenged more than ever.