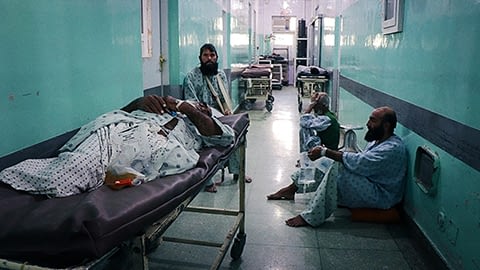 Concurrently with the fall of the previous government and the establishment of the Islamic Emirate in Afghanistan, the country’s health sector faced technical problems and a lack of medicines. Increase the difficulties for people in the country and the health sector of Afghanistan to face new challenges daily. While the Islamic Emirate claims that they are trying to address the health problems of Afghan citizens as soon as possible, experts believe that the current restrictions on the Taliban have prevented them from solving the challenges facing the country’s health sector.

“The main problems we have in our hospital are technical problems, including a lack of consumables for operating equipment, a decrease in specialist doctors, and an increase in the number of patients, “They are not in a good financial position. They go to government hospitals a lot to get their disease treated.” Dr. Aaron Aziz, an ophthalmologist, told the sight times.

Mr. Aziz also claims that many hospitals cannot heat in the cold season and can not use electric heaters. “If there is electricity, we are not allowed to turn on the electric heaters. If there is no electricity, there is no heater to heat the hospital rooms, and our patients will suffer more in this regard,” he added. Dr. Aaron also said that they have not received a salary for at least three months and that the Islamic Emirate has been able to pay it for two months with the help of the ICRC. He emphasizes that the Islamic Emirate has promised to pay the doctors soon. Still, they have not solved this challenge for various reasons, and the Islamic Emirate cannot pay their salaries.

Meanwhile, another doctor, who did not want to be named, said that he worked at Wazir Mohammad Akbar Khan Hospital and faced many challenges. “Our main problems in hospitals were the lack of supplies, the lack of diagnostic kits, medical supplies, the lack of proper transportation for doctors, and the non-payment of doctors’ salaries on time,” he told the sight times. “And this has caused serious challenges to the problems of doctors across the country, especially in Wazir Mohammad Akbar Khan Hospital, which is one of the busiest hospitals in Kabul.”

Morteza Rahimi, one of the patients, said: “At the same time as you admit patients to public hospitals, patients experience abnormal conditions because the heat in these hospitals is not good. Hospital rooms are cool completely at night, and patients experience cold weather. In addition, there are not many facilities where we can solve our patients’ problems. Many public hospitals are short of medicine, and many others do not have the right financial facilities. “Until they can treat their patients in private hospitals.”

“There are not enough medicines in public hospitals to be given to the patient, and we have to get these medicines from abroad at a very high price,” said Gulab, another patient. Unemployment has risen sharply in the country, and patients are not suitable financially. Yet, patients are forced to pay a lot of money to buy medicine abroad until they recover. Or at least stay alive in this situation. ” Due to many efforts, we could not have the view of the Ministry of Public Health in this report.