Doctors strike in Samangan due to non-payment of their salaries 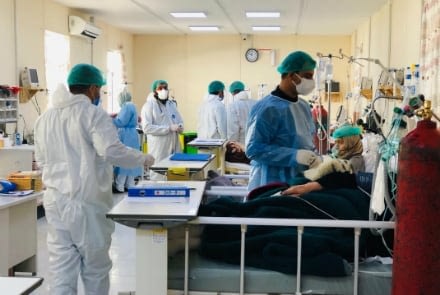 Dozens of doctors in the northeastern Afghan province of Samangan have gone on strike, insisting they will not return to work until their salaries are paid. Several doctors and service staff of Samangan Provincial Hospital have gone on strike due to non-payment of their wages. The doctors say they have not received compensation for months and that medical services in Samangan will be suspended until their salaries are paid, a case that has become a significant and troublesome challenge for the Islamic Emirate but is still an Officials of the Islamic Emirate have not commented on this.

At a protest rally on Monday, the sixth in a row, a number of these doctors said that they had not received their salary for about six months. They also claim that they have not been paid overtime for a year. In a tape sent to the media by these doctors, they claimed that if their benefits were not paid, they could not return to work because their families needed material facilities, and their needs had to be met.

The protesting doctors are concerned about continuing this process and say that they face many problems this winter due to the non-payment of their salaries. They are calling on the Taliban-led government to pay their wages. Otherwise, they will continue their strike. Attempts were made to seek the views of local Taliban officials in Samangan province, but with repeated calls, no response was received. The central government has not yet commented. The Taliban have previously announced that they will pay the civil servants’ quarterly salaries, but it appears that most civil servants have not been paid.

Meanwhile, the Taliban group removed two ministries and two commissions from their government a few days ago, and the group announced that due to organizational inflation and lack of sufficient funds, they were forced to stop the activities of these four government institutions. If there is a need to reactivate these structures in the body politic, the employees of these government departments can return to their duties. Meanwhile, officials at the Islamic Emirate have announced that the Taliban’s caretaker cabinet has decided to retire former ministry staff by paying their salaries, which has added to the people’s challenges.