Citizens of the country are worried about the increase in air pollution in Kabul city and say that with each passing day, the atmosphere of this city is becoming more polluted, and diseases and respiratory problems have increased. On the other hand, almost four months after the announcement of the cabinet of the Islamic Emirate, the Department of Environmental Protection is still unlucky. Still, the officials promise to introduce the head of this institution shortly.

Kabul, where poverty is rampant, and its residents are forced to use smoky fuels, causes air pollution and respiratory diseases. “The weather in Kabul is worrying and dangerous; it causes various diseases,” said Kabul resident Morgul.

Doctors also confirm that the number of respiratory patients has increased these days. These doctors are concerned about the level of air pollution in the capital. “Overall, the disease caused by air pollution is on the rise,” said physician Tamkin Ayoubi Aman.

The deputy mayor of Kabul also considers the city’s air pollution to be a concern and says that it is impossible to implement air pollution reduction programs without the cooperation of the people. “We made our efforts, it is the municipality’s duty, but we also ask the people to cooperate because everyone’s life is in danger,” said Hamdullah Nomani, Kabul deputy mayor.

But in the current critical situation, the National Environmental Protection Agency has had no oversight for nearly four months. The use of wood, coal and even plastic by citizens and factories and old tires by brick kilns around Kabul is the leading cause of air pollution.

Environmentalists warn that the continuation of this pollution will have more deadly consequences. 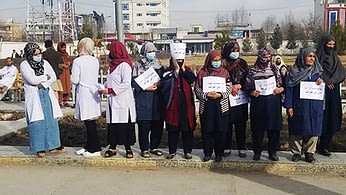